Samantha and Naga Chaitanya spotted together for the first time after divorce, see viral picture 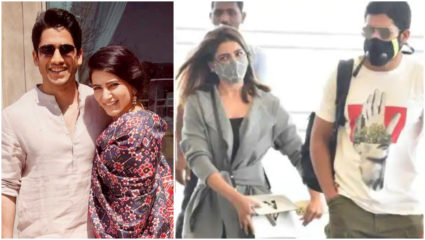 After divorce, Samantha Ruth Prabhu and Naga Chaitanya were recently spotted together. Both of them were seen together at Ramnaidu Studio in Hyderabad. For the first time after getting divorced, both of them were caught on camera together. While actress Samantha had reached Ramanaidu studio to shoot for her next film, Naga Chaitanya had arrived for the shooting of ‘Bangaaraju’. According to the information received, Samantha and Naga Chaitanya did not talk to each other and went to their respective cars after shooting. But a picture related to them is becoming increasingly viral on social media. It is known that Samantha is moving on in her life after separating from actor Naga Chaitanya. She is constantly signing many projects. Also busy with it. Directed by Hari and Harish, the first schedule of Yashoda has been completed and the second schedule will start from January 3 and will continue till January 12. On the other hand, Naga Chaitanya is awaiting the release of ‘Bangaaraju’ written and directed by Kalyan Krishna. After a long time in this film, they will be seen together on screen in ‘Bangaraju’.