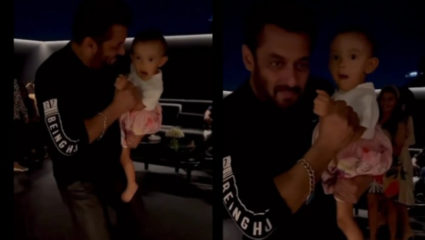 MumbaiBollywood actor Salman Khan celebrated his birthday last night i.e. on December 27 with his family, close friends and Bollywood celebs at his Panvel farm house. Salman is the superstar of Bollywood. These days Salman is constantly in the headlines due to his films. Now once Salman Khan has come in the discussion. As everyone knows, Salman is a family mind. How nice they like to spend more time at home. In such a situation, now a video of Salman is becoming fiercely viral on social media.

Actually, in the video, Salman is seen dancing in full swing with his niece Aayat. Although this video is from this birthday party or not it is not confirmed. But in the video, both are seen having a lot of fun. His fans are lavishing love on this video. watch this video

It is worth noting that Salman Khan loves children very much. In such a situation, Salman Khan loves his sister Arpita’s daughter Ayat very much. Arpita gave birth to Ayat on the day of Salman Khan’s birthday. So there is a special connection between Salman and Ayat. Salman Khan is one such actor of Bollywood who is known for generosity. But when Bhaijaan gets angry at someone, he does not immediately back down from reprimanding the person in front of the public.

Significantly, Salman Khan celebrated his birthday at the Panvel farm house. But in an unfortunate incident just a day before that, Salman Khan was bitten by a snake on 25th December. This happened in the garden area of ​​his farmhouse in Panvel. The actor was immediately rushed to Kamothe Hospital in Mumbai where he was treated for six hours and then discharged.

Reacting to the incident, Salman Khan said, “A snake had entered my farm house. I took it out using a stick. Slowly it reached my hand. Then I grabbed it to catch it, when it bit me three times. It was a kind of poisonous snake. I was hospitalized for 6 hours. I’m fine now.”

Share. Facebook Twitter Pinterest LinkedIn Tumblr Email
Previous ArticleCOVID-19: Omicron has the highest number of cases in Maharashtra, total cases in the country are 653
Next Article Siddharth Malhotra-Kiara Advani took flight to celebrate the new year, was seen at Mumbai airport like this