Ranveer Singh’s ’83’ earned only so many crores on the first day, collection was less than ‘Sooryavanshi’ and ‘Pushpa’ 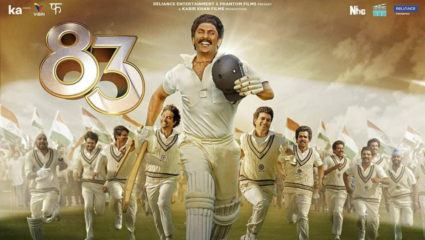 83 Movie Box Office Collection Day 1 early estimate: Due to the Corona epidemic, the release date of the most awaited film ’83’ was not announced by the makers. The makers were waiting for the last two years for the lockdown to open and normalcy to return. Lead actor Ranveer Singh was very excited about the film ’83’. But now that Ranveer’s film has been released, a big news is coming out about the earnings of ’83’. According to the information received, ’83’ has done a business of Rs 15 crore on the first day as compared to ‘Suryavanshi’ and ‘Pushpa’.

Confirming this, Box Office India said that Akshay Kumar’s ‘Sooryavanshi’ did 26.29 crores on the first day while Allu Arjun’s film ‘Pushpa’ did 50 crores business on the opening day. In comparison, Ranveer Singh’s film ’83’ has earned only Rs 15 crore at the box office. However, the Christmas holidays will benefit a lot in the film’s earnings.

In the film ’83’, Ranveer is seen playing the role of former cricketer Kapil Dev. The actor looks exactly like Kapil Dev in the film. Apart from Ranveer, Deepika Padukone is also seen in the film. Before the release of the film, Ranveer-Deepika are also seen promoting the film continuously. Well, ahead of the film’s release, Deepika Padukone, who is also producing the film, went to Mumbai’s Siddhivinayak temple to seek blessings. The actress also prayed for the success of the film by visiting the temple.