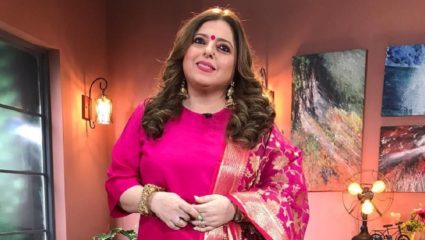 I have never been someone who works 30 days a month. I have always made sure that I take a break before taking up any project…

Mumbai: The channel ‘Star Plus’ is making a lot of headlines especially for its upcoming show ‘Kabhi Kabhi Ittefaq Se’. The story of the show will present how a loving family thrives together, this story will surely bring a smile to the faces of the viewers in this difficult time. Produced by Leena Gangopadhyay, Rajesh Ramsingh, Pradeep Kumar, Saibal Banerjee, Piya Bajpayee and Shaika Parveen, the show will feature Delnaaz Irani, Manan Joshi and Yesha Rughani in pivotal roles. Excerpts from an exclusive conversation with veteran actress Delnaaz Irani:

‘Kabhi Kabhi Ittefaq Se’ is a very ‘feel-good’ and ‘slice of a life’ show. There are no negative characters in it. It is a very sweet story of a joint family and my character’s name in the show is ‘Kiran’, aka ‘Goli Bua’, who is the aunt of the kids in the family. This is by far the most different as well as the toughest role that I am playing, even though it is a fun show, it is not purely a comedy show in the genre that people have mostly seen me in. Kiran is a teacher, a woman with a very strong leadership. She is the link between the elders and the younger in the family, being the friend of the children they trust in her. People are going to look at Delnaaz from a completely different angle this time and this excites me very much.

To be honest, I haven’t really prepared much to play Kiran. As ‘Kabhi Kabhi Ittefaq Se’ is a remake of a very popular Bengali show, many people asked me to watch it so that I can get an idea of ​​what my character should be like, but to be honest, I wanted to make this character my own. And wanted to play it in a completely different way. Seeing someone else will greatly affect my mannerisms and that’s why I want to avoid that and add a different color to this role. However, I have definitely made some preparations for this look. It is a very real show and a real character so I will be seen in a very simple saree look with straight long hair, low jewellery, kajal in eyes and a big round bindi will complete my look.

I haven’t taken any specific inspiration, but yes, I have definitely infused some shades of my mother’s personality into this character. She has been a very strict mother. I remember growing up, I used to be afraid of him, but he is also a very soft hearted person in general. I would also like to add that how Delnaaz and Goli Bua are almost alike. Like Goli bua, I also love my brothers very much. My nieces and nephews are my friends, but they also know their limits. So it was easy enough to be a goli bua in that regard.

Of course, at this level and age it feels great to be playing such an important role and I am extremely excited about this opportunity. I am especially grateful to the production house for believing in me and taking me out of that bracket and the image of a ‘comedy artist’.

Share. Facebook Twitter Pinterest LinkedIn Tumblr Email
Previous ArticleChhattisgarh: Call to take up arms for establishment of Hindu Rashtra in Raipur’s Dharma Sansad
Next Article Any action should be taken against the organizers of Dharma Sansad, only BJP will get electoral benefits.

There will be tremendous dance performance of Siddharth-Kiara in music ceremony, family will dance on these Bollywood songs