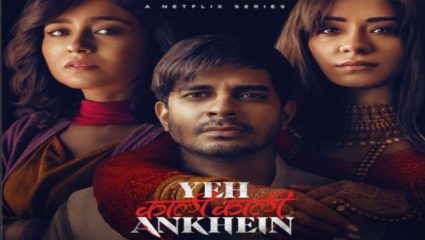 Mumbai : The actors of Netflix’s new series ‘Yeh Kaali-Kali Aankhen’ say, in the series of Shahrukh Khan (Shahrukh Khan) will play in Bollywood films. Colors of many characters will be seen. Tahir Raj Bhasin, Shweta Tripathi Sharma and Aanchal Singh will be seen in Yeh Kali-Kali Aankhen. Actors say the web series is inspired by Shah Rukh Khan and his characters in films like ‘Baazigar’, ‘Dilwale Dulhania Le Jayenge’, ‘Om Shanti Om’.

In the series, Tahir Raj Bhasin will be seen in the role of Vikrant, a simple boy who is so fond of Purva i.e. Aanchal Singh, that she will go to any extent to get him. At the same time, Vikrant falls in love with Shikha i.e. Shweta Tripathi. In this eight-episode series, Vikrant faces a different face amidst all the ups and downs and he too will go to any extent to get rid of Poorva and find his love Shikha. Tahir Raj Bhasin said, “It is impossible for a guy from Delhi to come to Mumbai to become an actor” and he is not a Shah Rukh Khan fan.

He ain’t no superstar he’s an institution

Tahir Raj Bhasin told ‘PTI-Bhasha’, “One is to be a superstar and then it is more important to be Shahrukh Khan. He is not a superstar, he is an institution. He had a dream and did everything to make it come true. It’s great to know that the series is inspired by Shah Rukh Khan.” Siddharth Sengupta is its producer and director. This will give the audience a new word ‘Shahrukh-Giri’. “It is referenced with utmost humility and respect,” he said. At the same time, Shweta Tripathi Sharma says that no one can romance like Shahrukh Khan. “He has shown us many forms of romance. I think that’s the fun of being an artist and the kind of person he is.

Inspired by ‘King of Romance’

What I love about cinema is that it affects your everyday life. It’s mostly about entertainment. But, many other facts are also involved in this. The film breaks many barriers including caste, religion.” Singh, who has watched Shah Rukh Khan’s films since childhood, says that she is happy to be a part of a series which is inspired by ‘King of Romance’. The series will also feature actors like Saurabh Shukla, Surya Sharma, Brijendra Kala, Arunoday Singh, Anant Joshi, Sunita Rajwar and Hetal Gada. The series will air on ‘Over the Top’ (OTT) platform Netflix from January 14. (agency)