Naga Chaitanya was not Aamir Khan’s first choice for the film Laal Singh Chaddha, this Malayalam actor told the reason for leaving the film 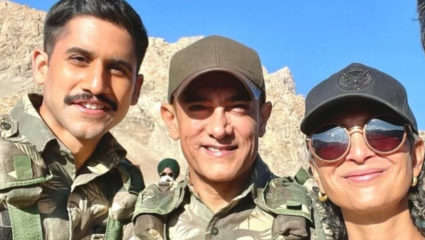 MumbaiActor Aamir Khan has been in the headlines for the last many days. Now once again Aamir has come into the discussion about his upcoming film ‘Lal Singh Chaddha’. The film has been shot in Ladakh. Apart from Aamir Khan, Kareena Kapoor Khan and South’s actor Naga Chaitanya will also be seen in this film. But do you know that instead of Naga Chaitanya in this film, Malayalam actor Tovino Thomas was Aamir Khan’s first choice.

In such a situation, now Tovino Thomas told why he had to refuse this project. Which benefited Naga Chaitanya. In fact, recently, while talking to ETimes, Tovino Thomas said that- ‘When I got a call for this film, I came to know that I will have to cut my hairstyle for this film and then I am shooting for ‘Minal Murali’. Then I had such long funk hair and this is a dream project for us, so I had to complete this film.

The actor also said that he realized that he was missing out on something huge, and he had no other option but to say no to ‘Lal Singh Chaddha’. He said, “I will not say that I regret not doing the film. But yes, I was also sad to let this film go.

Significantly, the film will be released on 14 April 2022. Advait Chauhan has directed this film. In this film, many such events will be shown in the country including Emergency, 1984 riots, Operation Blue Star, 1983 World Cup victory, Ram temple movement and many more.

Share. Facebook Twitter Pinterest LinkedIn Tumblr Email
Previous ArticlePakistan’s victory in T20: Families of Kashmiri students jailed in panic, bail not being heard
Next Article Big disclosure of ‘Spiderman Hero’ James Franks, had a relationship with his own students