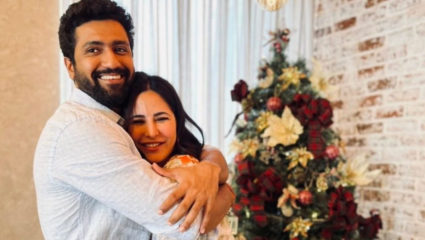 In which Katrina Kaif is seen washing utensils in her kitchen and at the same time she is smiling and speaking something. But, due to the song playing behind it, it is not clear what she is talking about. But, it is clear that he is very happy with it. Along with this, the song of ‘Sasural Genda Phool’ is playing in the background music. This video of the actress has been shared from the official page of Instant Bollywood of social media.

Whose caption reads ‘Katrina Kaif busy in kitchen’ Fans are very fond of this viral video and are giving their reactions on it. In which a user wrote ‘If she had married Salman, she would not even let her lift the needle’. At the same time, another user writes ‘Does she really do housework’.

The picture has got more than 46 lakh likes so far.

On the other hand, Katrina Kaif posted a smiling picture of herself and Vicky Kaushal on social media a few hours ago and wrote in her caption ‘Congratulations for a month’ to which Vicky Kaushal replied and wrote ‘Happy-happy’ while this post The picture has got more than 46 lakh likes so far.