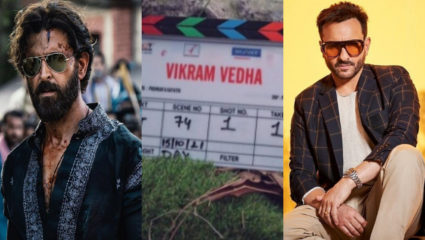 Mumbai : Actor Hrithik Roshan has given a big gift to his fans on Monday. In which the poster with his strong look in his upcoming film ‘Vikram Vedha’ has been released today. The actor himself gave this information by posting the poster on his social media. His fans were also eagerly waiting for this day. Which has ended today.

This strong look poster of the actor is being liked by his fans. Along with the poster release, the film release date has also been announced. Which will knock in all theaters on 30 September 2022. At the same time, if we talk about the release poster, then in the poster, the actor is wearing sun glasses with big, scattered hair and big beard and mustache. There are spots of blood on the forehead and chest. Along with this, he is seen in a strong style wearing a black kurta and black thread around his neck. At the same time, the poster posted by the actor has got more than 10 lakh likes so far.

The original version of Vikram Vedha was played by actor Vijay Sethupathi. Hrithik Roshan and Saif Ali Khan are playing lead roles in Vikram Vedha. Along with them, Radhika Apte will also play an important role in this film. Vikram Vedha is actually a Tamil movie. Released in 2017, the film was directed by Pushkar and Gayatri. R Madhavan and Vijay Sethupathi played their lead roles in this film. This successful film had earned 600 million and this film was also given many awards.

Share. Facebook Twitter Pinterest LinkedIn Tumblr Email
Previous ArticleNovak Djokovic got relief, Australia court extended the time of stay in the country, gave this decision on visa
Next Article Oppo is bringing cheap and powerful phone with great features in India! Know full details from specifications to price before launching