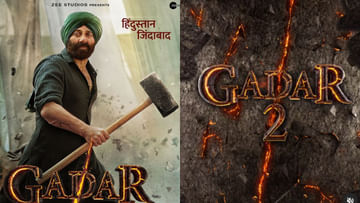 Sunny Deol First Look Gadar 2: The first look of Sunny Deol’s much awaited film ‘Gadar 2’ has come out. Fans are very excited to see Sunny Deol with a hammer in his hand.

Gadar 2 Poster : actor Sunny Deol The fans are eagerly waiting for the sequel of ‘Gadar’. Now after 22 years, the poster of ‘Gadar 2’ has been released, seeing which the fans are excited. Republic day Sunny Deol’s film on the occasion of ‘Gadar 2’ The first look of has been shared. Fans are getting impatient seeing this avatar of Sunny Deol. Fans are showering love on this Gadar 2 poster on social media.

Sunny Deol has shared the first look poster of the film ‘Gadar 2’ on his Instagram page. In this poster, Sunny Deol is seen wearing kurta and pyjama. Sunny Deol wearing a turban on his head is holding a hammer in his hand. Sunny Deol is looking very angry in the poster. Hindustan Zindabad is written on the poster.

Sharing the poster, Sunny Deol has written, ‘Hindustan Zindabad Hai… Zindabad Tha… Aur Zindabad Rahega. On this Independence Day, we bring to you the biggest sequel of Indian cinema after two decades. ‘Gadar 2’ is releasing in theaters on August 11, 2023.

Sunny Deol’s first look poster from ‘Gadar 2’ has become viral on social media. Fans are commenting fiercely. One fan has written- ‘Tara Singh has come’, while another fan writes- ‘Ab Tabahi Hogi’ Let us tell you that the film ‘Gadar: Ek Prem Katha’ was released in the year 2001. This film of Sunny Deol proved to be a super hit. For the last 22 years, the fans were waiting for its sequel. Ameesha Patel will once again be seen opposite Sunny Deol in the film. Anil Sharma is also directing the film ‘Gadar 2’.