From ‘KGF 2’ to ‘Lal Singh Chaddha’, these powerful films will be released in 2022 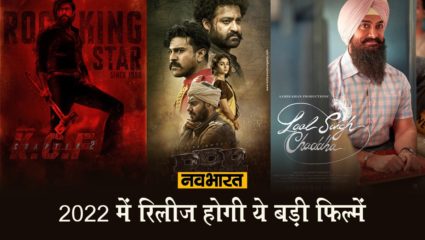 Upcoming Bollywood Film 2022: 2021 is about to be completed now and 2022 is about to begin. There are many new hopes from the new year. The new year will also bring many great films for the Bollywood industry. These include films like KGF 2, Lal Singh Chaddha, Dhaakad, RRR. In the year 2022, many big budget films will be seen entertaining the audience at the box office. Let us then tell you which films will entertain the audience in the year 2022 without wasting any time-

Laal Singh Chaddha is the biggest film of the upcoming year. This comedy-drama is directed by Advait Chandan with screenplay written by Eric Roth and Atul Kulkarni.

RRR is SS Rajamouli’s next film after India’s biggest film Baahubali. The film is based on a fictional account of the lives of two freedom fighters of India before they became freedom fighters.

Kashmir Files is an upcoming Indian Hindi-language film about the story of the exodus of Kashmiri Hindus.

Badhaai Do is the spiritual sequel to the 2018 film Badhaai Ho, an upcoming Indian Hindi-language family drama starring Bhumi Pednekar and Rajkummar Rao.

KGF: Chapter 2 is an upcoming Indian Kannada-language period drama action film, the second installment of a two-part series. It is the sequel to the 2018 film KGF: Chapter 1.

Heropanti 2 is an upcoming Indian Hindi-language romantic action film and the sequel to the 2014 film Heropanti.

Tejas is the story of a daring and furious fighter pilot. The film is inspired by a historic event in the history of the Indian Air Force, which became the first defense force in the country to induct women in combat roles.