After Karan Johar announced, Akshay Kumar-Emraan Hashmi will share screen together for the first time

Akshay Kumar & Emraan Hashmi announce next film with Karan Johar: Bollywood actor Akshay Kumar has more than one great films. Another film has joined this long list. The actor will be seen working with Emraan Hashmi very soon. Akshay Kumar himself posted a picture from his social media account while announcing the film. In this picture, Akshay-Imraan is sitting on the bike and Akki is taking a selfie. In this you can see that both of them seem to be stopped in the middle of a highway.

While Akshay Kumar is wearing a golden bomber jacket, Imran appeared in a blue T-shirt. Posting this film, the ‘Sooryavanshi’ actor wrote in the caption – ‘I found the perfect #selfie partner! Hey @karanjohar, have we finished this selfie game or what? @emraanhashmi’

Sharing this picture of Emraan Hashmi and Akshay Kumar, Karan Johar wrote, ‘No two others can kill it like you both @akshaykumar and @therealemraan. Stay tuned, something big is about to happen!!’ 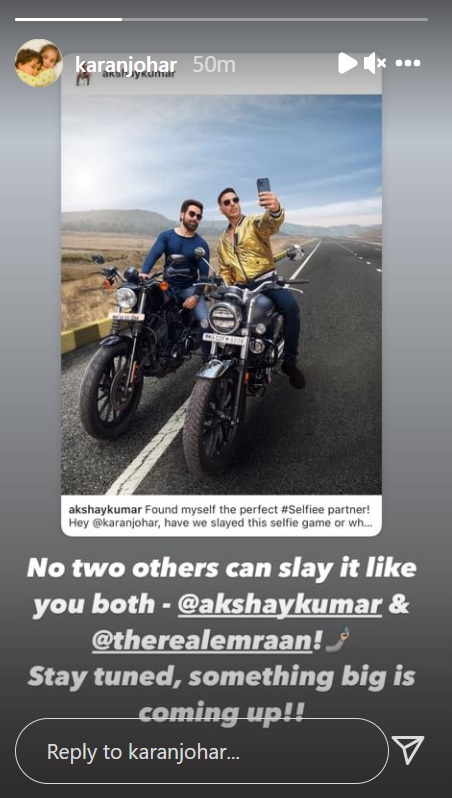 If media reports are to be believed, Akshay and Emraan will be seen in a film called ‘Selfie’ very soon. It is well known that there is going to be a remake of ‘Driving License’. It will be produced by Karan Johar and Prithviraj Sukumaran. On the other hand, ‘Good Newwz’ fame Raj Mehta will direct. Both the actors have apparently shot a 53-second teaser to announce the film.