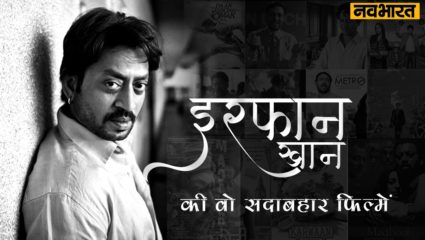 5 best movies of Irrfan Khan that you will also say ‘Wow what an acting’ after watching it does. Irrfan Khan was the artist who had the ability to capture the hearts and minds of the audience with his tremendous acting. He played many such characters in his films, which the audience has not forgotten even today. So let’s know about those 5 films of Irrfan Khan, seeing which you will once again become crazy about Irrfan Khan’s acting.

The film ‘Maqbool’, released in the year 2003, gave a different identity to Irrfan Khan, in this film directed by Vishal Bhardwaj which included many big actors like Irrfan Khan, Om Puri, Naseeruddin Shah, Tabu and Pankaj Kapoor. , The film was based on Shakespeare’s famous play ‘Macbeth’ in which Irrfan Khan was seen in the lead role of Mian Maqbool.

The film ‘The Lunchbox’, directed by Ritesh Batra, received a lot of love from the audience. Irrfan Khan also has the ability to rule the hearts of the audience with his talking eyes and his character in this film was such where he had to act more than his face. This film has also been awarded with many awards. Nawazuddin Siddiqui and Nimrat Kaur were also seen in important roles along with Irrfan in the film.

Irfan Khan’s tremendous acting was seen in the film ‘Paan Singh Tomar’ released in the year 2012. The film was directed by Tigmanshu Dhulia in which Irrfan played the character of famous athlete turned dacoit Paan Singh Tomar. Irrfan Khan was also awarded the National Award for this film.

Amitabh Bachchan and Deepika Padukone were also seen in pivotal roles along with Irrfan Khan in the film Piku. The jugalbandi of Irrfan and Amitabh was well-liked in the film. In this film, the audience was shown family relationships and everyday troubles.

Hindi Medium is one of the best films of Irrfan Khan in which you will get to see a lot of comedy. The film is directed by Saket Chaudhary, in which Saba Qamar and Deepak Dobriyal were seen in lead roles along with Irrfan Khan. Irrfan Khan was also awarded the National Award for this film.