This ATM made of junk will give hard notes! 10th student made model in 10 days 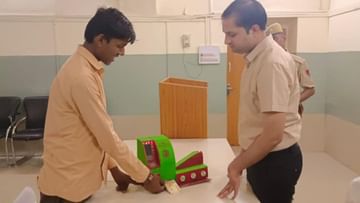 The 10th class student was given a project from the school. Using the junk lying at home, the student made an ATM machine in just 10 days. With this, coins also come out along with the notes.

Often we either throw the spoiled items in our house as junk or sell it to the scrap dealer. But a 10th class student living in Barmer, Rajasthan has made such a thing out of junk which cannot even be imagined. of Rajasthan government school This exploit of Bharat Jogal, who is studying in the film, is being discussed everywhere. The art of this child living in the rural area shows that the children living in the village also have a lot of ability.

Bharat, who is studying in 10th class, has made an ATM machine with the help of junk lying in the house. This ATM is not ordinary. Usually only notes are dispensed from ATMs of banks, but coins also come out from this ATM. People are coming from far and wide to see this machine. This student who has never used an ATM has created an amazing thing.

ATM machine made in just 10 days

Bharat Jogal, who lives in Barmer, Rajasthan, took only 10 days to make this machine. To make this, Bharat has used wire, motor, rubber, lid and waste materials. Bharat has made this machine by taking time out from studies. Bharat’s father is a labourer. The condition of their house is not good.

ATM made by 10th student

According to media reports, this machine has been prepared by Bharat under the INSPIRE Award Scheme of the Central Government. The selection of this machine has been done for state level and national level. This machine works like a normal ATM. The card has to be inserted in it first. After inserting the card, it asks to enter the PIN. After entering the PIN, you will have to type the amount of money you want. With this, coins will also come out along with the note.

ATM machine Inspirational story rajasthan school
Share. Facebook Twitter Pinterest LinkedIn Tumblr Email
Previous ArticleDhanush’s film ‘Sir’ will be released in theaters on this day, date announced in a special way
Next Article This player was imprisoned after the allegation of rape with the actress, now retired